Tom Peracchio uses the phrase "Geek History Enthusiast" on many of his online profiles to draw attention to his lifelong love of history and technology coming together at GeekHistory, a project that he has been working on since the late 1990s. In 2001 GeekHistory started as a single website as hand coded HTML.

GeekHistory is currently being developed as a handful of websites using different content management systems to collect technology history references and stories to increase awareness, educate, and entertain.

What is a Geek?

Tom Peracchio learned BASIC (Beginner's All-purpose Symbolic Instruction Code) back in 1975. The first computer he personally owned was a Commodore VIC-20. Perhaps that makes him a Geek.

Tom Peracchio has been hanging out on various online communities since the internet went commercial back in the mid 1990s. Back in the days of Compuserve they called them SIGs, Special Interest Groups. Tom has been through the evolution of special interest groups, to bulletin boards, and online communities. Tom has been a volunteer and editor for many web based activities over the years, such as web portals for webmasters, editor philosophyguru at the Open Directory Project (dmoz), editor philosophyguru at Wikipedia, and a moderator of the spirituality Pod at Tripod.

Tom started reading the works of the great philosophers when he was old enough to read. He took his first philosophy class back in high school. Since the late 1990s Tom has used his personal websites to organize his notes and to share with those who care to learn, for those who dare to dream. It only seems natural that his passions to share ideas and information all comes together in cyberspace.

Immersed into the lost episodes of Geek History 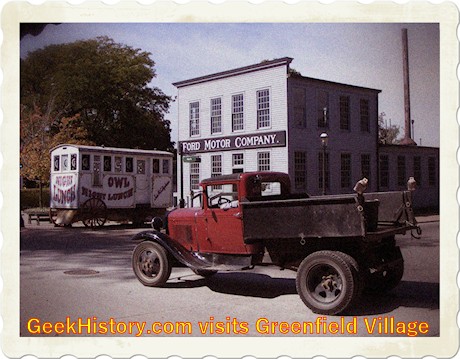 While many people spend the summer looking for lost episodes of the Walking Dead, Tom immerses himself into the lost episodes of Geek History, downloading and watching videos on the early days of computers and the internet from the Internet Archive.

Tom's annual vacation road trips explore GeekHistory at museums across the United States. On two different road trips through Michigan Tom visited the Henry Ford Museum and Greenfield Village in Dearborn, Michigan, near Detroit. As a tourist attraction and somewhere to learn about things and stretch your mind a bit, the Henry Ford Museum and Greenfield Village is the ultimate geek history complex of the Industrial Revolution. Henry Ford was a geek in every sense of the word, and Ford did a very nice job of bringing history together at the museum complex.

Edison's laboratory from Menlo Park, New Jersey, along with several boxcars of soil surrounding it, were moved from New Jersey to Greenfield Village in Michigan. The buildings were laid out according to exact foundation measurements from the original site. The exhibit was furnished with original item or faithful duplicates placed in the lab as they would be found in the original setting. The chair that Edison sat it when the exhibit was dedicated in 1929 has been nailed to the floor, never to be moved, and never to be sat in again. It is a shrine in every sense of the word, a sacred place dedicated to a specific figure of respect with numerous objects associated with the figure being worshiped.

Exploring the origins of all things geek! 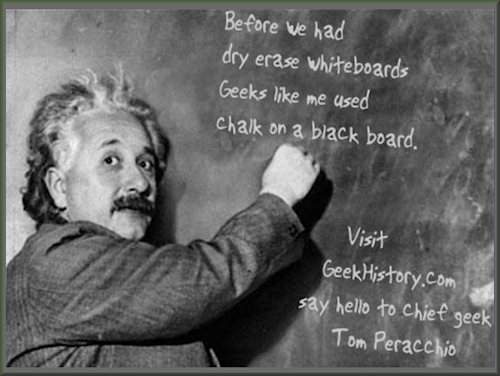 Tom is inspired to share ideas and information by the fact that he has been asked many times about the history of various technology topics. Sadly, Tom has discovered that most people don't realize the roots of much of the technology we all now take for granted.

Tom Peracchio is not a university professor with a team of editors and advisers. He is one man who loves technology and history and is amazed by how little people know about the great minds in the world of technology. He is frustrated by the many urban legends and so much folk lore surrounding the the history of technology.

Geek History is not meant to be an authoritative source for technology history. It is mean to increase awareness, educate, and entertain. To put GeekHistory in its proper context let us quote Walt Disney, “I'd rather entertain and hope that people learn, than teach and hope that people are entertained.”

The reason a lot of people do not recognize opportunity is because it usually goes around wearing overalls looking like hard work Thomas A. Edison